The Game ‘Live’ @The Concorde2 – Brighton 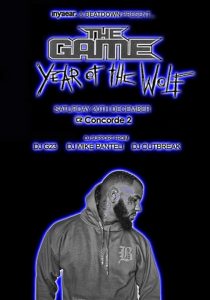 Since blowing up in the early 2000’s The Game has consistently delivered in his west coast flow to his fans worldwide. From appearing on several prolific mixtapes, collabo’s with the likes of 50 Cent, G Unit, Kanye West. Timbaland, Dr Dre, Chris Brown, Tyga (To name a few) to his debut album ‘The Documentary’ right up to his current album ‘Blood Moon:Year of the Wolf’. It’s safe to say that The Game is now a veteran of this rap game and an international star. This December 20th he shall be making his debut in Brighton showcasing tracks from the new album as well as some of his classic anthems.

I shall be in DJ Support duties alongside DJ Outbreak & DJ G23.

Don’t miss out. Get your tickets early.