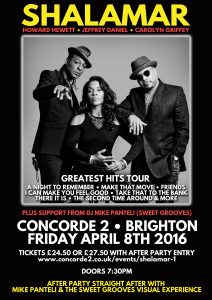 A Night To Remember…

In the late 1970s and early 1980s the name Shalamar became synonymous with the contemporary sound of catchy feel-good dance music. Shalamar are best known for a string of worldwide hits such as ‘The Second Time Around’, ‘Make That Move’, ‘I Owe You One’, ‘I Can Make You Feel Good’, ‘There It Is’, ‘Friends’ and of course their often copied anthem ‘A Night To Remember’.

In 1999, Howard Hewett and Jeffrey Daniel reformed the group and began touring again. For a number of years they left the third slot empty as they continued to invite Jody Watley back into the group. When they were happy that they had tried their best to encourage Watley to re-join, they felt that they should look for another female vocalist.The natural choice of replacement was Carolyn Griffey, daughter of founder Dick Griffey. She grew up a pre-teenager spending much time in the offices and studios of Solar Records in the presence of the original Shalamar and their label bandmates including The Whispers, Midnight Star and her mother Carrie Lucas, herself an accomplished R&B artist.

Since Carolyn came on board in 2001, the group have been able to extend their performance repertoire to those songs such as ‘Full Of Fire’ which require a female presence.

*Tickets available for concert & club night entry* The show will be followed by SWEET GROOVES: For the first time ever, Juice FM’s Mike Panteli brings his Sweet Grooves radio show out of the studio and into the club. Mixing up classic Soul, Funk & Disco anthems with the unique addition of the old school videos and live performances projected onto the BIG screen in the venue as you’re hearing them, so you can dance along with these legendary artists. It’s a DJ set and a concert rolled into one.