KRS One ‘Live’ at The Haunt – Brighton

Home/KRS One ‘Live’ at The Haunt – Brighton 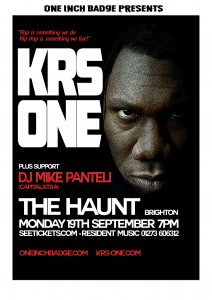 When it comes to Hip Hop, no one is as consistent and influential as KRS-One. It is impossible to discuss Hip Hop’s history without discussing KRS-One. His reputation as both a live performer and as Hip Hop’s resident “Teacha” has reached mythic proportions. As author Tavis Smiley has put it; “You are going to encounter a man who has sincerely sought to develop a relevant, honest and contemporary interpretation of world history, culture, religion, and philosophy. In many ways, his work actually rests in the tradition of great thinkers like W.E.B. DuBois, Carter Woodsen, and John Henrik Clarke, men who have sought to develop a cultural veil through which to interpret the seeming insanity of America.”

Throughout his 20 year career trajectory legendary pioneer Krist Parker who goes by the pseudonym KRS-One (Knowledge Reigns Supreme Over Nearly Everyone) has given fans over a dozen classic Hip-Hop albums, spoke at more then 500 universities/colleges including Harvard, Yale, Princeton, Spelman, Howard and Oxford, been nominated for Grammy Awards, received multiple RIAA certified gold and platinum sales accolades and become the definitive source for conscious urban music. Nicknamed “The Teacha” the New York native and acclaimed MC has been honored by the United Nations, Billboard Magazine, The Source, BET Hip-Hop Awards, VH-1’s Hip-Hop Honors and Harvard University to name a few. He has been given the keys to the city in Kansas City, Philadelphia and Compton, was nominated for the NACA 1992 Harry Chapman Humanitarian Award, holds the Reebok Humanitarian Award and three Ampex Golden Reel Awards. KRS One is viewed as the embodiment of the philosophical, sociological and political worldview espoused originally by those that participate in Hip Hop’s culture. He is presently one of the most outspoken leaders of Hip Hop’s politics and tradition. His integration of Hip Hop and metaphysical knowledge resonates throughout his music, lectures, and writings as his powerful presence continues to inspire generations. As Rolling Stone once put it, “He’s one of the most influential lyricists of all time.”

Born in New York in the 1960’s and raised by his single mother, Kris quickly learned how to take care of himself on the “streets” as his family shuffled between Brooklyn, Harlem and the Bronx throughout the 1970’s. Sometime around 1981 the young teenager left home to pursue his purpose as a philosopher/emcee. He would use the Brooklyn Public Library at Grand Army Plaza for shelter and learning. As part of the homeless population, Kris would venture onto the 3rd Street/Bowery shelter as well as the 166th Street & Boston Road shelter in the Bronx where in 1985 Kris would fatefully meet a social worker, Scott Sterling a.k.a DJ Scott La Rock and the two of them would form the renowned rap group Boogie Down Productions. Tragically, the duo only made one album together Criminal Minded (“an unadulterated classic and the template for all subsequent gangsta rap” according to Rolling Stone) when Scott La Rock was fatally shot trying to break up a street dispute. Long before the slayings of Tupac Shakur, Christopher “Notorious B.I.G” Wallace and Jam Master Jay it was Scott La Rock who became hip-hop’s first martyr to senseless violence. With the death of his close friend Kris became even more inspired to reach an echelon where he could offer words of change. The New York Times once noted, “Kris Parker’s rise from homelessness to stardom, and from stardom to academic respectability, took a mere three years.”

In 1987 Afrika Bambaataa called a historic meeting at the Latin Quarter night club where he urged the Hip Hop community to become more politically and socially active. Personally influenced by the meeting, KRS-One went to work releasing a 12″ single entitled “Stop The Violence.” The popularity of this song gave rise to a swelling community of conscious Hip Hop. Then in 1989, KRS-One and author/musicologist Nelson George, developed an all-star project that would become a legendary Hip Hop peace anthem, “Self-Destruction”. The recording boldly denounced Black-on-Black violence with memorable verses from the likes of Kool Moe Dee, “I never ever ran from the Ku Klux Klan and I shouldn’t have to run from a black man.” It was in the same year that KRS One inaugurated The Stop the Violence Movement (STVM), a non-profit organization deeply rooted in the Hip Hop community with a mission to advance an ongoing series of movements to diminish global violence through education, critical dialogue, grassroots organizing and direct action. It’s mission was to provide organized programs, workshops, symposiums and media campaigns that would heighten the awareness of the effects of violence, creating multi-generational forums and supplying parents and youth oriented educational tools for conflict resolution. This past year (2008) in response to the increased violence and confusion, KRS-One revitalized the Stop The Violence Movement, calling upon the global Hip Hop community to take responsibility for the way in which conflict is resolved. Active members and participants include 50 Cent, Ali Shaheed Muhammad, Busta Rhymes, Cassidy, Channel Live, Chingy, Doug E. Fresh, Dr. Cornell West, Fat Joe, Immortal Technique, Jamel Shabazz, Just Ice, KRS-One, Ludacris, Martin Luther King III, MC Lyte, Mele Mel, Pastor Troy, Rick Ross, Talib Kweli, Whodini as well as various professional athletes and notable figures.

Vibe Magazine hails KRS-One as the “Bronx Hip Hop Ambassador” and he continues his reign, delivering rhymes to a host of upcoming projects including The Game (L.A.X), L.L. Cool J (Exit 13), Talib Kweli (Prisoner of Conscious), Planet Asia (Pain Language), DJ Revolution (King of the Decks), EPMD (We Mean Business), Buckshot (Conflosation), Fat Joe (The Elephant in the Room), Freddie Foxxx (Royalty Check), MC Lyte (Back to Lyte & Almost September), Alchemist (Chemical Warfare), Melky Jean (Care for Haiti) as well as tracks alongside Grandmaster Flash, Channel Live, Rahzel, Redman, Sadat X & Lord Jamal and Tony Touch. KRS One and Buckshot (Boot Camp Clik/Black Moon) also prepare a joint collaboration entitled Conflosation (Duck Down Records) which will be an album full of Hip-Hop conversation, ranging from New World Order, to socially conscious topics such as unemployment, poverty, and politics. Dru Ha, CEO of Duck Down Records says, “To say we are honored and humbled would be an understatement. Buck and I have known KRS since our early days in the game. But with the nostalgic feelings of KRS being one of my favorite MC’s growing up to the side, it’s KRS’ continued relevance of today that’s most exciting. KRS has a message in his lyrics, a gladiator performer who reps the culture and posses all the qualities that an MC should embody: Meaningful lyrics, mastery of the flow, intense creativity and a ferocious live show.” Other projects on the horizon for KRS One include a solo acoustic album and performance DVD alongside instrumentalist Harold English as well as a musical extension of Stop The Violence Movement which will manifest itself as a mixtape entitled Self Construction, in honor of the historic 1989 single “Self-Destruction.” The album will feature notable guest appearances from Busta Rhymes, Method Man, Redman, Ne-Yo, Nelly, Talib Kweli, Lil Mama, Cassidy, The Game, Naughty by Nature, MC Lyte, Dilated Peoples, Rah Digga, Mele Mel and more.

An accomplished author, KRS One has published two prolific books including; The Science of Rap (1995) and Ruminations (2003) which Black Issues Book Review praised as, “a comprehensive tome, part self-help, part manifesto. Conducting probing, piercing metaphysical inquiries on everything, including government, religion, the music industry.” In March 2009 KRS One will release the anticipated The Gospel of Hip Hop through his own imprint “I Am Hip-Hop” through Power House Books Publishing. Acknowledging that KRS One is a walking embodiment of the cultural practices and moral philosophies of true Hip Hop, the imprint will serve as an outlet for creative expressions of his vibrant and lasting culture. “The I Am Hip Hop imprint will serve as a home for real and true expressions of Hip Hop,” comments KRS One. The Gospel of Hip Hop is a philosophical masterpiece set in the format of the Christian Bible, the 700+ page opus and guide for those who clam hip-hop as their culture. The Gospel of Hip-Hop combines faith and practical classic knowledge for a fascinating, in-depth exploration of Hip Hop as a life-path. KRS One engages in the philosophy of self-creation and painstakingly details the development of the “Hip Hop Kulture” and the ways in which readers can and should preserve its future. The book relays specific instances in history wherein readers can discover the same spirit and ideas that are at the core of our current manifestation of Hip Hop. KRS One explains Hip-Hop down to the actual meaning and linguistic history while describing ways in which readers can change their current circumstances to create a future that incorporates Health, Love, Awareness and Wealth. The book is beautifully written, inspiring and Power House Publishing says, “Working with KRS One offers a rare opportunity and privilege to play a part in history in the making. This founding father of Hip Hop was behind the legendary Boogie Down Productions and is arguably more creative in 2008 than ever before.”

In addition to remaining loyal to such Hip Hop preservation organizations as Zulu Nation, the Hip Hop Congress, and Rock Steady Crew, KRS One has also founded two other Hip Hop activist non-profit organizations including Human Education Against Lies (1991) and The Temple of Hip-hop (1996). KRS-One remains a zealous community organizer, philosopher and philanthropist. Whether sounding off political anthems in support of Mumia Abu Jamal and Nelson Mandela or shedding a different light on the September 11th attacks, KRS-One has never backed down to the fear of controversy. Even today he performs and lectures regularly, inspiring peace, love, safety and unity. For KRS-One Hip Hop is an empowering lifestyle capable of raising one’s self worth, and with his own life he has proved it!