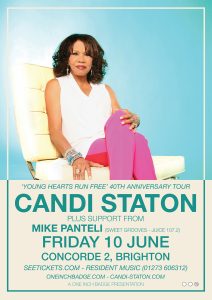 So excited have the legendary Candi Station play Concorde 2 this June!

She was once known as the First Lady of Southern Soul for a string of gritty southern fried Top Ten R&B hits (I’m Just A Prisoner, Stand By Your Man, In The Ghetto) she cut at the hallowed FAME Studios in Muscle Shoals, AL during the early ’70s and by the end of the decade she was hailed as a disco diva for her danceable chansons such as 1976’s #1 R&B smash “Young Hearts Run Free.”